Aim of the work: To study the effect of vitamin D3 administration on the follicular fluid level of vitamin D3 and pregnancy outcome in obese polycystic ovary (PCO) patients undergo intra-cytoplasmic sperm injection (ICSI).
Study type, time and site: Prospective cohort study from January 2014 to March 2015 at private in-vitro fertilization (IVF) center.
Patients and methods: Study participants were ninety eight obese PCO women aged 20-39 years who were candidates for ICSI. They were divided into two groups: Group A: Patients who went directly to ICSI and Group B; patients who received 1000 IU of Vitamin D3 twice daily for 3 months prior to IVF. Standard long agonist protocol was used for all patients and serum Vitamin D3 level was estimated for each of them. The main outcome of the study was the pregnancy rate in relation to the vitamin D3 level.
Results: Serum Vitamin D3 levels in Group B after treatment were significantly higher than before treatment (p=0.0002). Strong positive correlation (r=0.859, p<0.001) was found between serum vitamin D3 level and follicular fluid vitamin D level at the time of ICSI procedure. There was a 33% more chance of achieving pregnancy after receiving vitamin D3 treatment.
Conclusion: Oral administration of vitamin D before ICSI in obese PCO patients improved the serum and follicular fluid vitamin D level and yielded better pregnancy rate.

Polycystic ovarian syndrome is common disorder affecting 4% to 12% of women in their reproductive age [1]. A number of previous studies have demonstrated associations between vitamin D levels and the pathogenesis of various PCOS symptoms including insulin resistance and other metabolic disorders, infertility and hirsutism [2-5]. These associations are exerted through gene transcription, hormonal modulation influencing insulin metabolism and fertility regulation [6].

In obese people vitamin D is deposited in adipose tissues, making it unavailable for the body to use. As a result, obese people are expected to have low levels of serum vitamin D [7].

Vitamin D has a biologically probable role in female reproduction. In human ovarian tissue, 1,25-dihydroxyvitaminD3 (1,25(OH)2D3) stimulate progesterone production by 13%, estradiol production by 9% and estrogen production by 21% [8]. 1,25(OH)2D3 regulates human chorionic gonadotropin expression and secretion in human syncytiotrophoblast and increases placental sex steroid production [9]. Calcitriol is important for the development of the uterus and essential for endometrial development, allowing uterine receptivity to implantation [10].

Many studies have reported inverse associations between bodyweight (BMI, body fat and waist measurements) and serum 25OHD levels in women with PCOS [4-7].

IVF Studies investigating the association of vitamin D status with IVF outcome revealed inconsistent results, some studies showed that women with higher levels of 25(OH)D in serum and follicular fluid were significantly more likely to achieve clinical pregnancy following IVF and high vitamin D levels were significantly associated with improved parameters of controlled ovarian hyperstimulation [11], whereas, other studies, in contrast, found no significant associations of 25(OH)D levels in serum and follicular fluid with IVF outcomes [12]. Moreover, some studies showed negative association between1, 25(OH) 2D3 and quality of embryos and clinical pregnancy [13].

Up to the present time, there is insufficient data to accurately evaluate the effects of vitamin D in women undergoing IVF.

Aim of the Work

To study the effect of vitamin D3 administration on the follicular fluid level of vitamin D3 and pregnancy outcome in obese PCO patients undergo ICSI.

The study protocol was in accordance with the guidelines of Declaration of Helsinki [14] and included written consent from the participants. In a prospective cohort study from January 2014 to March 2015 and included 98 obese (BMI≥ 30) women aged between 20 and 39 years, with polycystic ovary syndrome based on the Revised 2003 consensus on diagnostic criteria and longterm health risks related to polycystic ovary syndrome (PCOS) [15], the selected women were candidates for IVF-ICSI. The exclusion criteria were patients with medical disorders related to vitamin D3 metabolism e.g. renal impairment, mal-absorption syndrome, obstructive jaundice and parathyroid dysfunctions.

Women who satisfied the inclusion criteria were randomized to one of the two study groups according to a sequence of computergenerated random numbers:

Group A: Patients who went directly to IVF-ICSI cycles.

Group B: Patients who received 1000 IU vitamin D3 twice daily for 3 months prior to IVF-ICSI cycles.

The primary outcome measure for the study was the occurrence of clinical pregnancy. All patients enrolled in the study underwent IVF cycles per standard clinical care. Standardized regimens for controlled ovarian hyper-stimulation (COH) and pituitary down regulation were employed. (Decapeptyl® 0.1 mg, Ferring Co., Germany), starting in the mid-luteal phase at a dose of 1 amp/day SC and continued till the day of Ovitrelle® (choriogonadotropinalfa) Merck Serono administration.

Treatment started on day 2 of every woman’s menstrual cycle with a FSH dose of 2-6 ampoules (75 IU each ampoule) depending on the age of every woman. This dose was given for 4 days and then it was modified according to the ovarian response. When at least three follicles reached a diameter of 18-22 mm, Ovitrelle® (choriogonadotropin alfa) was administered and 34-36 hours later, ovum pick up (OPU) was performed under light sedation.

16-18 hours post-IVF/ICSI the fertilization percent, expressed as ratio of oocytes with two pro-nuclei (2PN) to the total number of injected oocytes, was scored.

Fertilization failure was indicated by the absence of PN. Following cleavage of all normal fertilized oocytes, morphological grade of all embryos was assessed 5 days post-OPU. Morphological grade was scored numerically in terms of the blastocysts, grade of fragmentation (in scale 1 to 4 with the fourth scale representing no fragmentation) and irregularity of blastocysts (in scale 1 to 2 with the second scale representing regular blastocysts). Five days post- OPU and after assessment of embryo quality a maximum of three selected embryos (depending on the age or on the number of available embryos) were transferred to the uterus. The luteal phase was supported by 400 mg of Cyclogest (Actavis, Barnstable, and UK) vaginally two times per day. The administration started on the day after the oocyte was retrieved. The serum βhCG was also checked 14 days after the embryo transfer. In case of pregnancy, Cyclogest was continued until the tenth week of gestation. Clinical pregnancy was confirmed by transvaginal sonography with at least one gestational sac in the uterine cavity.

Blood samples were collected for 25-OH vitamin D3 assessment during oocyte retrieval. All blood samples were centrifuged at 1,000 g for 15 minutes, and serum was stored at -20°C until assayed. Additionally, follicular fluid (FF) was aspirated from each follicle, pooled from all retrieved follicles and centrifuged (800 g for 15 minutes) after which it should be clear and not contaminated with blood. The FF was also stored at -20°C until assayed. The vitamin D was checked by enzyme immunoassay (25-hydroxy vitamin D EIA kit, IDS Ltd., Cat. Nos.: AC-57F1 and AC-57F2, UK). Statistical analysis was performed using 2-sample t-test, Mann-Whiteny U test, Pearson correlation and Odds ratio using Minitab ver.17 statistical software (Minitab Inc., USA).

Six (12.2%)out of 49 patients in Group A, and 4 (8.2%) out of 49 in group B failed to complete the study due to cancellation of the cycle because of failure of induction protocol to get sufficient number of follicles (≥ 3), and those patients were excluded from the study.

On comparing the demographic data of the two study arms, there was no significant statistical difference (Table 1, Figure 1). 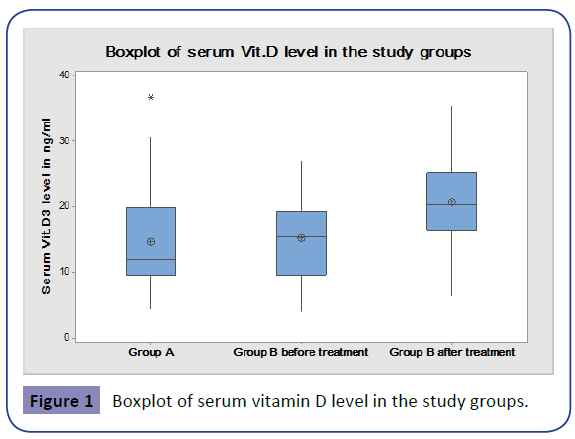 Serum Vitamin D levels in Group B after treatment were significantly higher than before treatment (20.8 ± 6.7 (p=0.0002) using Mann-Whitney test (Figure 2). 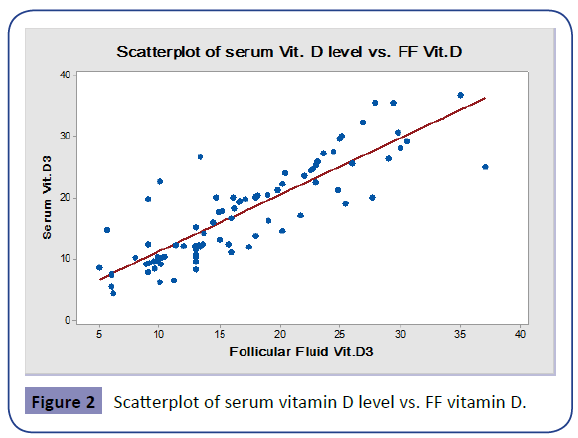 Strong positive correlation (r=0.859, p<0.001) was found between serum vitamin D level and follicular fluid vitamin D level at the time of ICSI procedure (in group A and Group B patients after treatment). 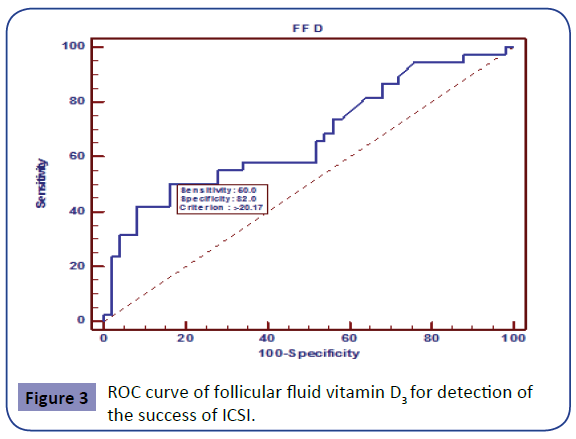 Figure 3: ROC curve of follicular fluid vitamin D3 for detection of the success of ICSI.

From the data of all the patients in both study groups it was found that, above the level of 20.17 follicular fluid vitamin D level has 50% sensitivity and 82% specificity for detection of the success of ICSI.

The serum level of vitamin D3 and the pregnancy rate in cases of ICSI were the subject of previous published studies; these studies investigated the role of vitamin D3 in early pregnancy, its expression in the endometrium and it's method of action [15].

In the current study, we tried to improve the serum level of vitamin D3 before ICSI in cases of obese patients with PCO by oral administration of vitamin D3; we compared the pregnancy rate in these patients in comparison with other patients who went directly to ICSI.

The results of our study demonstrated that there is a correlation between the level of vitamin D3 in serum and follicular fluid. Also our results showed that vitamin D3 1000 IU twice daily improved the ICSI outcome. Ozkan [18] and Anifandis [19] reported a direct association between vitamin D levels and IVF success. Rudick [20] demonstrated that deficiency in vitamin D resulted in lower pregnancy rates for non-Asian patients but not for Asian patients. They added that the lack of association between vitamin D levels and IVF success in Asian patients was probably due to the fact that they had lower IVF pregnancy rates.

Rudick [20] also suggested that there was no relation between the vitamin D deficiency and the number of follicles and oocytes or with the morphology of the embryo.

We suggest that the effect of vitamin D3 on the pregnancy rate in cases of ICSI is mediated through its effect on the endometrium not on the oocyte retrieved or the embryo development.

Vitamin D has a variety of functions, such as the stimulation of ovarian steroidogenesis and the production of Insulin-like growth factor-binding protein-1 (IGFBP-1) in ovarian cells through vitamin D receptors. Insulin and vitamin D stimulate estradiol, estrogen, and progesterone production. Vitamin D also improves the inhibitory effect of insulin on IGFBP-1 production [10]. Vitamin D induces the transcription of HOXA10 (an important gene for implantation) through vitamin D receptors. Treatment with vitamin D increases mRNA and protein expression of HOXA10.

Vitamin D also has a direct impact on the regulation of HOXA10, and this has implications for fertility [21].

The above suggestion seems to contrast with the finding of decreased expression of vitamin D binding protein (VDBP) in the IVF success group reported by Estes [22]. This discrepancy is difficult to explain, and more data are needed to elucidate it.

The authors report no conflict of interest.