An Unusual Presentation of Rupture in an Unscarred Uterus

This paper presents a case of a 36-year old female who experienced a rupture of her unscarred uterus during delivery of her child. She was induced with prostaglandins at 37 weeks for reduced fetal movements and her labor was augmented with oxytocin. A kiwi assisted vaginal delivery was performed in view of 2nd stage fetal bradycardia. A few hours post-delivery, she complained of chest pain. She was noted to be tachycardia and hypotensive. On examination, she had a tender abdomen with rebound and guarding. Investigations revealed that she had a 4g/dL drop in haemoglobin and a CT scan was suggestive of a uterine rupture. She underwent an exploratory laparotomy and was confirmed to have a posterior uterine wall rupture, which was repaired. She recovered well and was discharged on the 3rd post-operative day. Serious morbidity and mortality was likely avoided in view of a high index of suspicion. Induction and augmentation of labor have been known to predispose to uterine rupture. Fetal bradycardia may be the only sign of an intrapartum uterine rupture, hence the use of continuous electronic fetal monitoring is vital when these agents are being used.

It is well-known that uterine rupture is an obstetric catastrophe associated with previous scarring, with an incidence of 1 in 200 in those undergoing vaginal birth after caesarian delivery (VBAC) [1]. Little is known though about its occurrence in an unscarred uterus.

In this age of modern obstetric practice, the previously recognized risk factors have become obsolete with the increased utilization of caesarian sections. Prolonged or neglected labours are rarely allowed with the introduction of the partogram. Fetal macrosomia and malpresentation would have been detected antenatally by the utilization of ultrasounds. Breech babies are now delivered by caesarian sections since the publication of the Term Breech Trial [2], and the rate of instrumental deliveries has decreased over the years due to a reduction in training hours, lack of senior supervision and fear of litigation [3].

Nevertheless, modern obstetrics also has its pitfalls. Induction and augmentation of labour play a big part in modern obstetric management and have been shown to predispose to uterine rupture [4-6]. Other non-iatrogenic risk factors include advanced maternal age, multiparity, uterine anomalies and maternal connective tissue disease [7].

A 36 year old lady with 2 previous term normal vaginal deliveries underwent an induction of labour at 37 weeks in view of reduced fetal movements. She had no significant past medical history. She had an uneventful evacuation of uterus 7 months prior for a missed miscarriage. Her antenatal care had been uneventful.

She had two Prostaglandin E2 3 mg pessaries inserted per vaginally 7.5 hours apart. Her membranes were ruptured 12 hours after the 2nd PGE2 pessary when she was 3 cm dilated. Oxytocin augmentation was commenced at a low dosage. 1st stage of labour lasted 4 hours. During the 2nd stage of labour, continuous electronic fetal monitoring showed fetal bradycardia and a kiwi assisted vaginal delivery was performed. 2nd stage of labour lasted 50 minutes. A baby girl with a birth weight of 2946 g was delivered with a 1 minute Apgar of 5 and a 5 minute Apgar of 9. Paired cord gases showed an arterial pH of 6.77 with a base excess of -16.4 and a venous pH of 6.84 with a base excess of -15.3.

In the subsequent hours postnatally, the patient first complained of central chest pain radiating to the lower back. Cardiology referral was made and cardiac workup was done. She was noted to be tachycardic and hypotensive about 4 hours later. Clinical examination revealed a tender central abdomen with guarding and minimal per vaginal bleeding.

Urgent blood investigation showed a drop in Haemoglobin from 12.6 g/dL to 8.4 g/dL. Trop I and CK were both elevated and an ECG showed sinus tachycardia. Differential diagnosis included acute coronary syndrome and aortic aneurysm dissection, but in view of her highly suspicious intrapartum history of fetal bradycardia, uterine rupture was foremost as our differential (Figure 1). 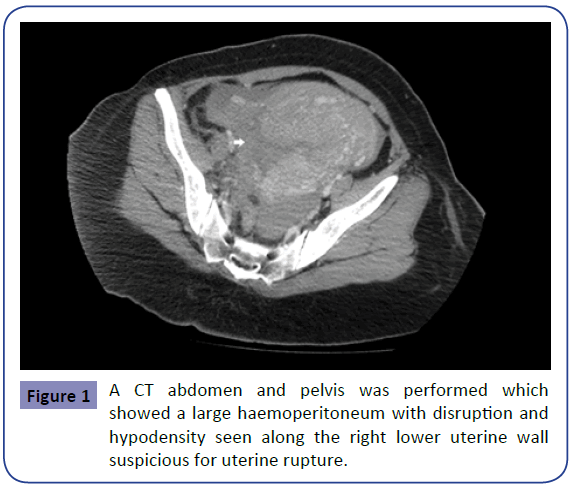 Figure 1: A CT abdomen and pelvis was performed which showed a large haemoperitoneum with disruption and hypodensity seen along the right lower uterine wall suspicious for uterine rupture.

She underwent an exploratory laparotomy and was found to have a 6 cm vertical right posterior uterine wall rupture close to the broad ligament with 1.6L of haemoperitoneum. The defect was repaired in 2 layers and a pelvic drain was left in situ. She was transfused with two units of packed red blood cells and one unit of fresh frozen plasma. She was commenced on empirical intravenous antibiotics i.e. cefazolin and metronidazole.

She recovered well and was discharged on post-operative day 3. She was well at her 5 week postnatal check-up. Baby was also well and was on full breastfeeding.

Though rare, uterine rupture in an unscarred uterus should be suspected in any postnatal collapse. The hallmark signs of intrapartum uterine rupture include maternal tachycardia and fetal bradycardia. In view of the unexplained fetal bradycardia, she had likely ruptured intrapartum but it only became clinically evident postpartum. Our patient presented with chest pain that radiated to the back immediately postnatal. Intraperitoneal bleeding as a result of uterine rupture may have caused the intraperitoneal irritations and hence her manifestations. A few hours later, her vital signs i.e. tachycardia and hypotension, steered us to the possible underlying diagnosis of uterine rupture. A high index of suspicion is critical here as this may have likely prevented the subsequent serious maternal morbidities and mortality.

The site most commonly involved in uterine rupture was the lower uterine segment in both scarred and unscarred uterus. Involvement of the uterine cervix was significantly higher among patients without previous uterine scarring [10].

Several studies have reported that maternal and neonatal morbidity and mortality were more common in patients with an unscarred uterus [11-14]. The theory has been that because there was no confined weak area, such as a previous incision, the tear may progress and involve vital, adjacent organs, leading to more serious complications. Also, because of the lack of presence of a scarred uterus, there may be a delay in diagnosis of uterine rupture due to its rarity in an unscarred uterus. Fortunately for our patient, this was not the case.

Albeit rare, there have been multiple case reports of uterine rupture in an unscarred uterus. A high index of suspicion is crucial in timely diagnosis and treatment and preventing serious maternal morbidity and mortality. We must also be mindful of the risks of uterine rupture with the use of induction and augmentation agents in modern obstetric practice. Continuous electronic fetal monitoring is important when these agents are deployed, as fetal bradycardia may be the only sign in such case.

Uterine rupture may only become clinically apparent postpartum and anyone who is at risk should be monitored closely for any signs and symptoms of uterine rupture such as maternal tachycardia, hypotension and non-specific abdominal pain.