Gestational Weight Gain in a Woman with Peripartum Cardiomyopathy

Copyright: © 2016 Sakamoto A et al. This is an open-access article distributed under the terms of the Creative Commons Attribution License, which permits unrestricted use, distribution, and reproduction in any medium, provided the original author and source are credited.

Greater gestational weight gain (GWG) may be a risk factor for peripartum cardiomyopathy (PPCM). In counseling, women with a prior history of PPCM associated with greater GWG should be advised to avoid excessive GWG in subsequent pregnancies. The third pregnancy occurred in a 36-year-old Japanese woman with height of 1.48 m and left ventricular ejection fraction (LVEF) of 62% following the first and second pregnancies complicated with PPCM and spontaneous abortion, respectively. She exhibited GWG of 14.7 kg (from 37.0 to 51.7 kg) and normal or nearly normal plasma B-type natriuretic peptide levels and LVEF (>55%) throughout the current pregnancy. In her first pregnancy at the age of 33 years, extraordinary GWG of 30 kg (from 38.5 to 69.1 kg) preceded PPCM with nadir LVEF of 22% at 6 weeks postpartum followed by more than 18-month LVEF of <55%.

Peripartum cardiomyopathy (PPCM) is defined as by the European Society of Cardiology as follows: “idiopathic cardiomyopathy presenting with heart failure (HF) secondary to left ventricular (LV) systolic dysfunction toward the end of pregnancy or in the months following delivery, where no other cause of HF is found.” It is a diagnosis of exclusion. The LV may not be dilated but the left ventricular ejection fraction (LVEF) is nearly always reduced below 45%” [1]. PPCM occurs in 0.03% to 0.3% of pregnant women [2-4] with a mortality rate ranging from 4% to 15% [5-8]. Recovery of LVEF (>50%) occurs in approximately 50% of patients within 6 months, but the risk of recurrence of HF in subsequent pregnancies is high in the group where the LVEF has not normalized before the subsequent pregnancy [9]; in the subsequent pregnancies of 16 women with persistent left ventricular dysfunction (LVEF<50%), the mean LVEF (±SD) decreased from 36 ± 9% to 32 ± 11%, symptoms of heart failure occurred in 44% (7/16), and 19% (3/16) died [9]. In counselling, advice against a subsequent pregnancy is recommended in women with LVEF of ≤25% at diagnosis of PPCM or where the LVEF has not normalized [1].

The presenting symptoms in PPCM patients include dyspnea, orthopnea, tachycardia, and peripheral edema [1,7]. The common presenting symptoms, such as dyspnea, orthopnea, and peripheral edema, suggest excessive water retention in patients with PPCM, and greater gestational weight gain (GWG) preceded PPCM exclusively in our previous three PPCM cases encountered over the past decade [10-12]. One of these women became pregnant again 2.5 years later. This case was followed up carefully with respect to cardiac function and GWG, and suggested that limiting GWG was effective in the avoidance of PPCM recurrence. This case is presented with the consent of the patient and approval of the institutional review board of Hokkaido University Hospital. All work was conducted in accordance with the Declaration of Helsinki.

A 36-year-old Japanese woman became pregnant for the third time 30 months after delivery of the 1st child. Her height was 1.48 m. Clinical details of her first pregnancy at age 33 years complicated with PPCM were described previously [10]. Briefly, in her first pregnancy, GWG was 30 kg (from 38.5 kg at gestational week [GW] 12 to 69.1 kg on the day of delivery at GW 34), and she gave birth to a healthy premature boy weighing 2576 by emergency caesarean section. However, she had suffered from sustained decreased LVEF (<55%); LVEF was 27% on the day of delivery, and 35%, 30%, and 22% on 1.0, 2.6, and 6.0 weeks postpartum, respectively (Figure 1), and 39%, 42%, 52%, and 56% on 9, 12, 18, and 28 months postpartum (2 months prior to the establishment of the current pregnancy). Her second pregnancy at age 35 years ended in miscarriage at GW 7. The current pregnancy (her third pregnancy), carefully monitored with respect to cardiac function with echocardiography and GWG, was uneventful with neither the development of PPCM, hypertension, nor proteinuria. Her pre-pregnancy body weight was 37 kg and GWG was 14.7 kg (51.7 kg on the day of delivery at GW 37), and plasma B-type natriuretic peptide (BNP) level and LVEF remained normal or nearly normal throughout pregnancy (Figure 1). She left hospital on day 10 postpartum after giving birth to a healthy female infant weighing 2325 by repeat caesarean section. 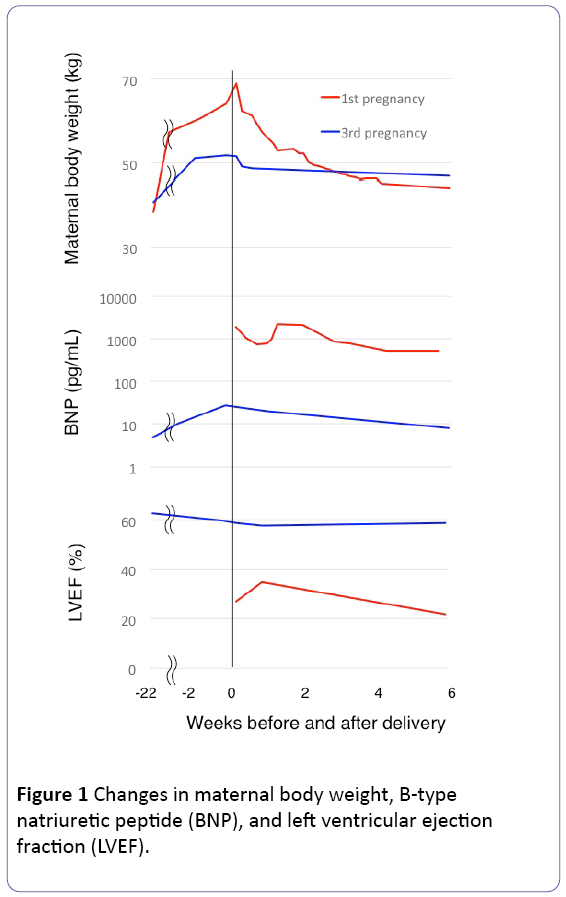 The LVEF was 62% in the early stage of the current pregnancy in this patient and PPCM recurrence risk was estimated to be more than 20% based on a previous report [9]; in the subsequent pregnancies of 28 women with normalized LVEF (>50%) after PPCM, more than 20% decrease in LVEF occurred in 21% (6/28) of women and symptoms of heart failure occurred in 21% (6/28) of women [9].

GWG was 14.7 kg in the current pregnancy, while approximately 30 kg in her previous pregnancy complicated with PPCM. Although not verified, we speculated that the much lower GWG in the current pregnancy may have somewhat contributed to the avoidance of LVEF worsening in the current pregnancy based on our experience in three previous PPCM cases, including two other than the present case; both were twin pregnancies and exhibited greater GWG (25.5 kg in one with height of 1.60 m, pre-pregnancy weight of 53 kg, and delivery at GW 32 [11] and 18.3 kg with the greatest weight gain of 6.0 kg during the last four weeks of gestation and the greatest weight loss of 19.2 kg during one month postpartum among 90 women with twin deliveries at GW≥32 in the other with height of 1.56 m, pre-pregnancy weight of 51 kg, and delivery at GW 34 [12]). GWG may vary according to ethnicity. However, among 128838 and 5573 Japanese women with singleton and twin pregnancies, respectively, the numbers of women with GWG>20 kg, >25 kg and >30 kg were 1.1%, 0.20% and 0.06% for women with singleton pregnancies and 3.2%, 0.43%, and 0.09% for twin pregnancies, respectively [13]. Thus, three PPCM cases, including one in a previous pregnancy of the present case, were associated with greater GWG.

The circulating blood volume theoretically increases with increasing GWG. Average GWG reaches a pre-pregnancy body weight of approximately 20% [13], while the circulating blood volume physiologically increases in pregnancy by approximately 40% [14] and this natural volume overload leads to physiological cardiac hypertrophy [15]. However, in a mouse model, pathological hypertrophy (remodeling showing relative lack of capillary density with contractile dysfunction) can occur in the presence of sustained overload [16]. Cardiac biomarkers, such as NT-proBNP and high-sensitive troponin I (TnI), increase significantly during the late stage of pregnancy even in uncomplicated pregnancies, especially in women with well-known risk factors for PPCM, such as preeclampsia and multifetal pregnancy [17]. Both pre-eclampsia and multifetal pregnancy are associated with greater GWG [13,18]. Patients diagnosed with PPCM exhibit high levels of both NT-proBNP and TnI when tested [19]. Thus, greater GWG may be associated with risk of PPCM via greater circulating blood volume expansion.

Experience based on a single case may not deduce any conclusion; however, previous report indicates: 1) PPCM is highly likely to recur, and 2) our data showed that excessive weight gain during pregnancy was a risk factor of PPCM. In counseling, women with a prior history of PPCM associated with greater GWG should be advised to avoid excessive GWG in subsequent pregnancies, although evidence supporting this recommendation is currently lacking.